What is the link between an anti-seismic device and a racing car?In previous articles we already discussed the effect of torsional dampers on the dynamic behaviour of the crankshaft.The concept of a device made from a vibrating mass, Tuned Mass Damper or simply TMD, that can reduce the vibrations of a mechanical system, dates back to the beginning of the study of mechanical vibrations.
Typical applications of mass dampers are found in power transmissions, in the automotive industry, on high-voltage power lines, in large static structures such as skyscrapers, bridges and viaducts.The first applications of mass dampers to reduce oscillations, induced by wind action and earthquakes on bridges and considerable height buildings, with so heavy loads to generate structural failures, is now more than 50 years old.
In this case masses suitably connected through springs and hydraulic dampers, are able to reduce the amplitude of the main structure when this latter is subject to external actions.Calculation of the main parameters is run in order to get that energy of the inertial mass can partly break down the one of the structure.

Between 2005 and 2006 the Renault Formula 1 team used this simple device to improve the performance of their car.In this case the mass damper, installed in the nose of the car, was made from a mass of about 10kg, free to vertically move between two springs with oil acting as damping element. 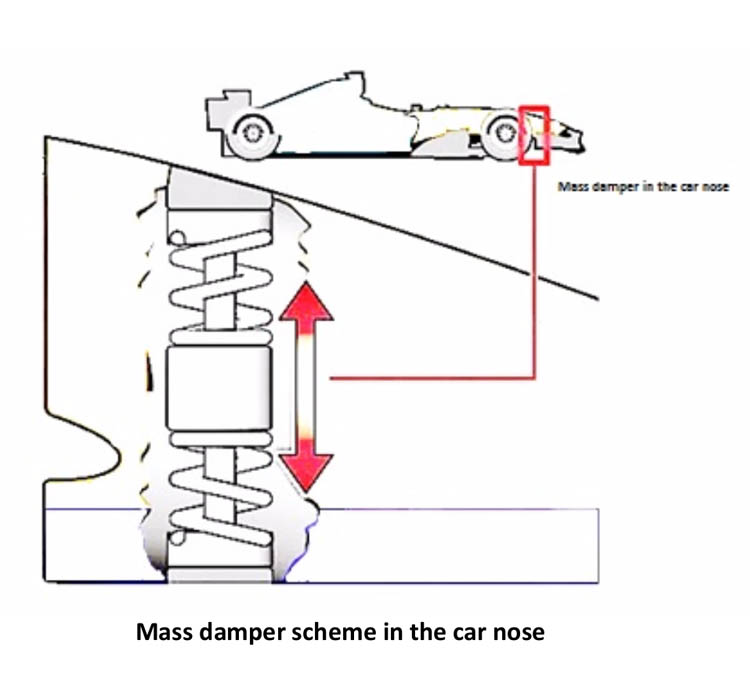 The simplified model of the mass damper in the car is shown below.

Also in this case the mass damper effect is to counteract the vertical movements of the chassis, moving in opposition of phase to it and then reducing its amplitude fluctuation.The picture below shows the  car oscillations, with and without mass damper, and the mass damper movement over time.

A racing car is subject to shaking and vibrations just like a bridge or a skyscraper when subject to the action of an earthquake.Indeed, we can say that the combined action of vertical and lateral loads is much more complex than the ones on a static structure.When travelling over the curbs rather than on the tarmac bumps or simply due to the lateral load transfer in turn, the tyre contact patch continuously varies and mechanical grip drops down.

The most important effect of the mass damper was to reduce the ride height change of the front car floor and wing resulting in an improved control of the aerodynamic load.The overall performance of the car dramatically improved by using the mass damper.Around mid-season 2006 the system was declared illegal as it was considered a moving  aerodynamic device, banned by technical rules.Safety arguments were also added but there are still plenty of doubts on their foundation.

Looking at the mass damper model it is easy to see how a small mass, coupled with appropriate stiffness and damping values, can reduce the vibrations of a much larger mass.
Numerical modeling allows to define the basic characteristics of the mass damper during the design stage.

But where can a mass damper be used?Applications are infinite and all those in which it is necessary to kill the vibrations of a system without being able to change dimensions and materials.The use of mass dampers has very often become essential as a treatment for issues on existing structures that can no longer be modified.They can be used on boats to reduce vibrations, offshore structures, sports and leisure equipment.Typical mass damper applications are found in wind turbines and some household appliances.Unique studies have been made to reduce vibrations of telescopes and improve their image quality.

It can be said that knowledge of physical phenomena and analogies with problems of very different nature, can suggest fairly complex design solutions, the effect of which is essential for the final performance of any system or mechanical component.Being back to the beginning: isn't a hot lap an earthquake?