The post rig is an experimental analysis tool, extensively used by car manufacturers and factory racing departments since several years.
But how is it made?

Without going into too many details, basically a post rig is a system of four or more computer controlled electrohydraulic actuators.

The number of the actuators generally ranges from four to seven, depending on whether you want to simulate the absolute and relative movements of the body and wheels only or the aerodynamic effects also.

The car is placed with the wheels on the actuators that can transmit different signals to the wheels, from standard waveforms to inputs describing a particular type of road surface or recorded on a specific route, all reproducing the main wheel movements.

Potential of such a tool is remarkable since it allows to test infinite combinations of car parameters with the aim of defining the optimal configuration according to the expected targets.

In example for a road car one of the goals will be the best compromise between handling and ride comfort, for a race car one focus will be to find the suspension setup that would result in the best aero balance.

Of course the cost of such systems can vary from hundreds of thousands to million euro, depending on the complexity of the system and for this reason accessible to big companies with significant financial endowments such as car manufacturers, component manufacturers or test centres.

Performing tests on the real car, trying different configurations on suspension geometry, type and adjustment of shock absorbers, weight distribution, etc. means to get the physical parts, with the additional costs of prototype manufacturing.

In order to prevent that, numerical simulation techniques has got a huge push in the last twenty years and plenty of purpose made models for vehicle dynamics were developed.

Softwares to simulate lap times or the transient behaviour of vehicles are now commonly used both for road and race cars.

But what can the added value of a virtual post rig be?
Actually, there could be several.

Think to work out a test session on a real post rig: defining a matrix of configurations is not easy, sometimes exploring the extremes before detecting the "optimum area" is needed.

Virtual post rig simulation would help reduce the number of configurations, removing the useless ones with reasonable time and cost savings.

While defining a completely new car, the chance to simulate and optimize its basic behavior before making any prototype is a key issue in the technical and economic management process of the whole project.

The development of a virtual post rig is not a novelty, having been the subject within research programs and being available as a routine in some existing vehicle simulation programs, but all with some limitations.

A few years ago, we were involved in the definition of a virtual post rig that, within the limits of the development level at that time, used to simulate a WTCC car, provided very interesting indications for the shock absorber setup.

By calculating the main parameters, some of which are shown below: 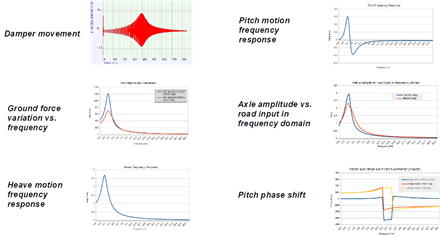 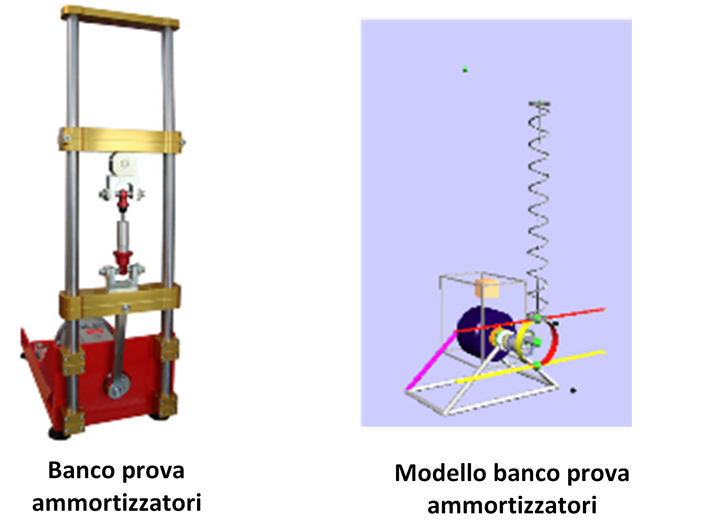 So said it would look as a perfect tool already available especially to small companies as private race teams or prototype and small series manufacturers who do not have the financial resources to rent a real post rig.

Unfortunately things are different because other than cost advantages, possibility to run simulations overnight just with the help of a computer and test endless configurations before making the prototypes, different aspects must be considered such as the development of the model, whose reliability will be more accurate by increasing the number of simulation runs performed on different types of cars and components, as well as the availability of tire data to define the most suitable tire model, the characteristics of the car, that are not always easily available or require significant financial and time resources to be generated.

Will the virtual post rig become a tool useful and accessible to all?
It's likely a current use tool for some and, if we make a parallel with the early days of CFD and skepticism generated by mistakes and differences when compared to data from the wind tunnel, it could be worth to be further developed.

But it's still a hard road if the target is to make a fairly "simple" tuning tool available to more and low skilled users.