In a previous article we talked about the effects that the weight reduction, or rather the reduction of the moment of inertia, of the flywheel can have on the vibrational behaviour of the engine.
We also mentioned the fact that this modification results in a change of the torsional eigen frequencies (and not only) of the crankshaft.
This effect might have an adverse impact on the behaviour of the engine and the driveline components, if not properly countered.

In order to better understand what can happen we need to make a short recap on the torsional eigen frequencies of a crankshaft.
We consider a crankshaft of a four-stroke, in line four-cylinder engine as shown below.

The crankshaft, when stressed by the thermal cycles of the four cylinders, will start to torsionally vibrate with the following main modes:

1. Rigid motion of the crankshaft as a result of the not costant moment of the engine and therefore of the rotational speed, also called "rolling" and described by a curve, such as that below, with the largest amplitudes occurring at low speeds 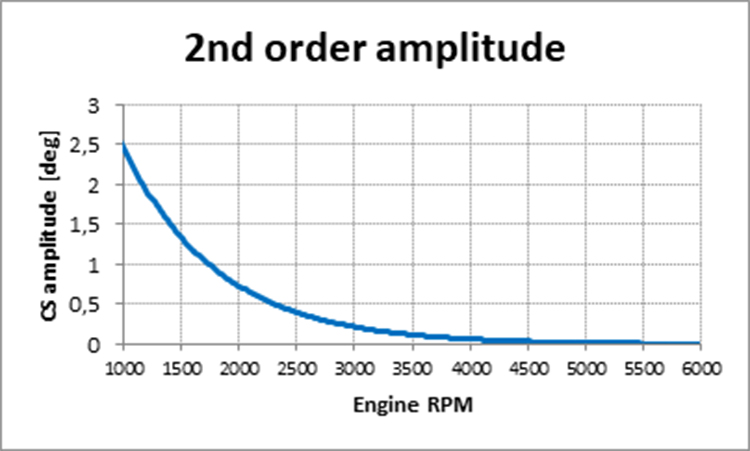 2. 1st vibrating mode with a node close to the flywheel and torsional amplitudes, in opposition of phase to the ones on the flywheel, higher on the front free end of the crankshaft as shown below:

3. 2nd vibrating mode with two nodes on the crankshaft axis and torsional amplitudes in phase on the two free ends and in opposition of phase between the two nodes.

In reality, the vibrating modes are infinite, and an equal number of nodes will correspond to each mode level.
In simple words, the third and fourth vibrating modes will have, respectively, three and four nodes and so on.

And it's worth to remember how the higher the frequency and the number of nodes the lower the amplitude of deformation.
This is the reason why, for example, in an in line four-cylinder engine, the analysis is usually restricted to the first and second vibration modes.

This may not be enough on a high performance engine or the analysis of the higher vibrating modes might be required to investigate noise related issues.

The nodes are the most stressed areas in terms of material deformation and therefore represent possible breaking points on which a material stress reduction is needed.
Increasing the sections of the crankshaft would be the easiest action but this would only be possible at the design stage of a new engine and anyway would result in an increase of the  weight and inertia that are certainly not the goal on a high performance engine.

Usually torsional dampers, fitted on the free end of the crankshaft (opposite the flywheel) where the highest vibration amplitudes occur, are used.

By using a damper on the free end of the crankshaft, the vibration peak (and stress) is split into two peaks of lower amplitude (red curve).

Let's be back now to the initial question.

If an engine is designed for competition use only, it goes without saying that the design and usage criteria (high rpm) may not require the use of a torsional damper.
But what happens if a road car engine is turned into a race powertrain?

In this case it is necessary to be very careful because simply removing the damper, for weight and dimension reasons, could be possible but it has to be checked if the increase of the vibration amplitudes generate stresses that do not meet the reliability requirements in terms of fatigue.

In addition to that, if the moment of inertia of the flywheel has been reduced, it must be taken into account that the eigen frequency of the crankshaft changes and the standard damper will no longer be tuned and will no longer work properly.

Of course all that can be carefully forecasted and evaluated with proper calculation models in order to define the best combination of the characteristics of the flywheel and the damper according to the expected performance.